On the road again!  We left Compiegne for our first ‘real’ day of traveling.  The reason it is ‘real’ is that most days we don’t get a ‘base of operations’ we no longer get to check into the hotel, leave our bags, and then explore. Instead we have to work out of the car.  This means that we each have to carry a backpack with ‘essentials’ in case we get robbed.  Essentials means medicines and technologies.

We left Compiegne for Pierrefonds.  This is my FAVORITE castle – it was my first castle andit still is amazing.  You drive through the forest of Compiegne to get there – it is very much a storybook forest.

On the way we passed the Clearing of the Armistice – and while it wasn’t on our original list – I added it to the film.  I mean how often do you get to stand on the place that WWI ended?!  In 1940, Hitler made France sign a treaty (this time with Germany in control) in WWII on the same spot.  There was a wagon that both treaties were signed in but Hitler destroyed it in 1945 because he didn’t want to have to sign a treaty in it himself! 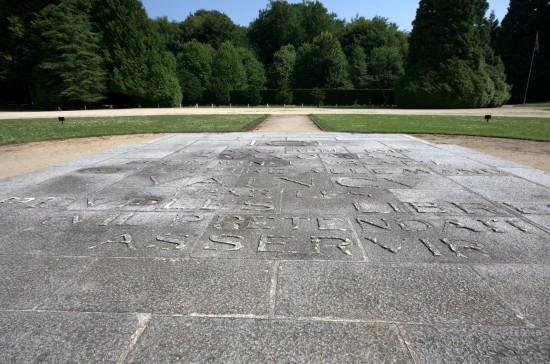 In front of the museum they had a tank from WWI. 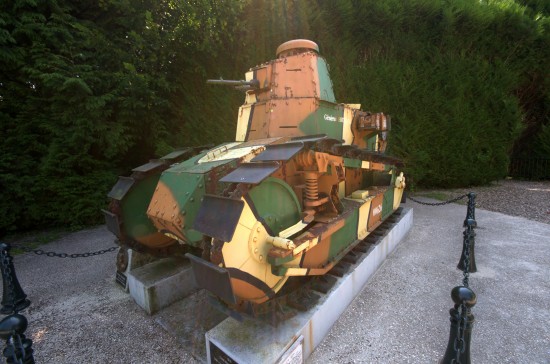 This tank wasn’t the only old vehicle we saw – the parking lot was filled with these ‘classic’ cars.  It made Amanda and I feel better about leaving our luggage in the car. 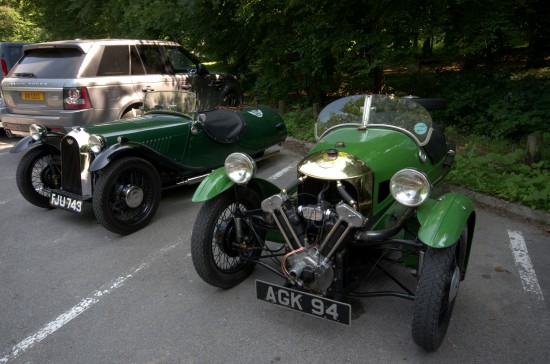 This is a 3 wheeler! 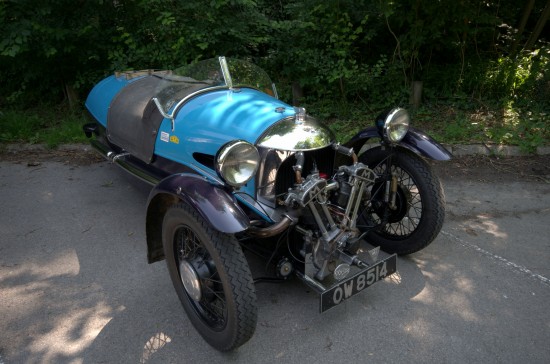 After the Clearing of the Armistice we drove to Pierrefonds.  The castle just LOOMS over the city.  We grabbed a quick lunch before we went in.  We ended up both getting meat trays (and then swapping bits off of each others plate). 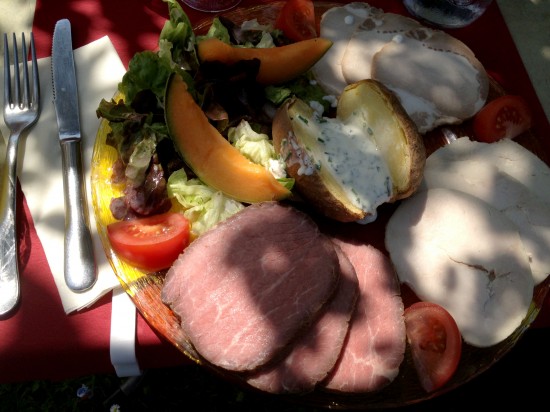 I will say that this time Amanda picked better than I did.  She had a giant thing of melted Brie – though we both got baked potatoes. 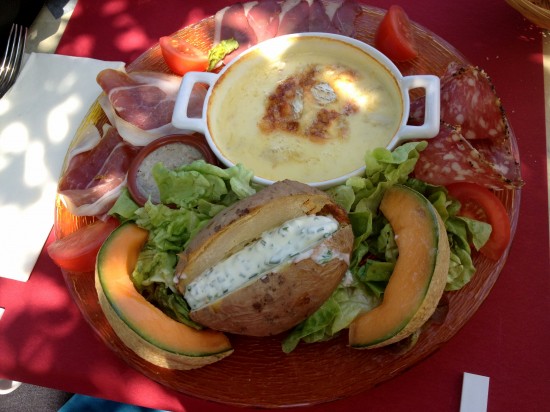 I love Pierrefonds.  Did I say that? Each year I go back and take this SAME shot.  It never gets old for me. 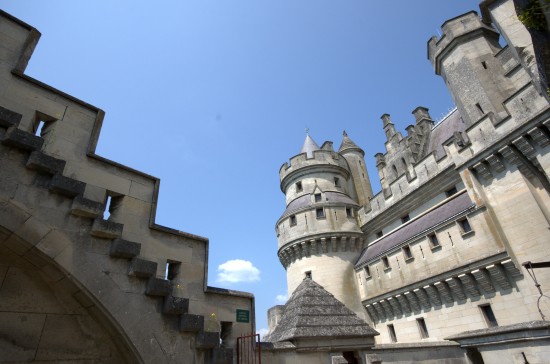 The Pelican-Bat-Frog is also an old friend!  I think this shot is the best I have ever taken of it. 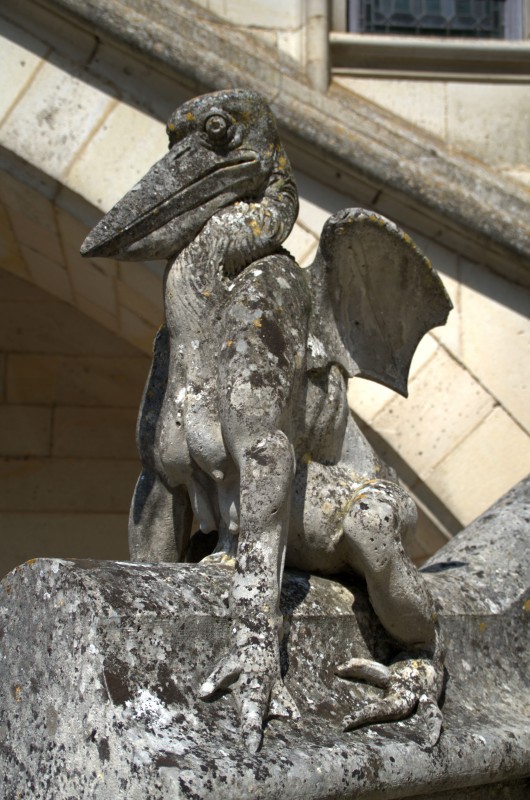 I noticed one of the decorations was a blacksmith! 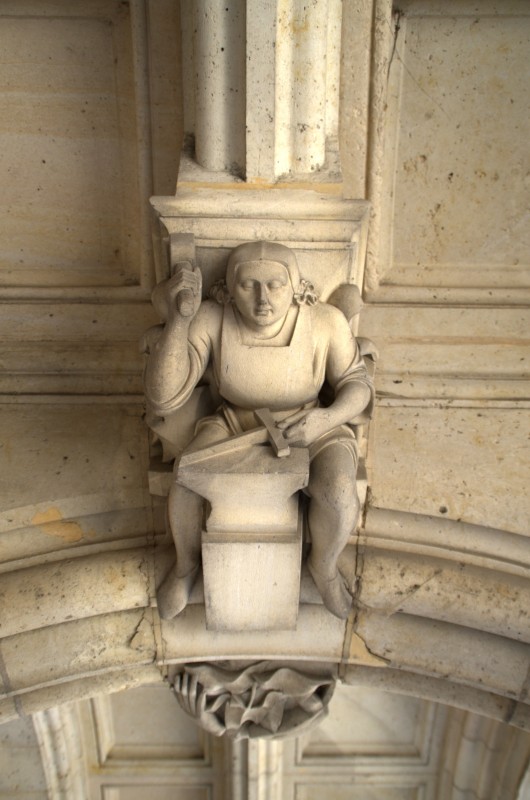 Over the years, the displays have changed.  The entire castle is in constant renovations and is used to make TV shows and Movies.  Most recently the TV Series Merlin was set here so a lot of people really recognize it.

Several years ago they opened a crypt like area in the basement.  It is filled with effigies of famous people and they have interesting lights and audio to make it a little ‘spooky’.  The effect is great and you can tell that it really freaks out the school children who are visiting. 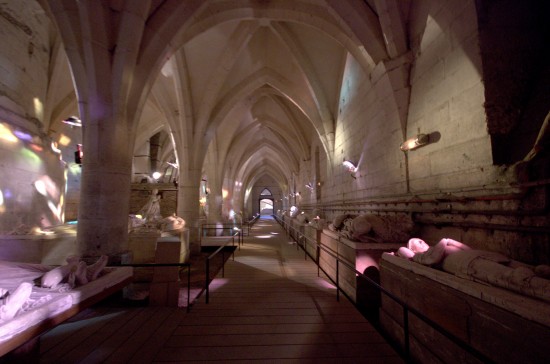 Speaking of children. One group of students on a field trip from Bushmead Primary school in Luton, England started talking to me and kept telling me that they loved my ‘American’ accent.  They asked me if they sounded ‘posh’ to me with their English accent.  They also kept asking me to say their names like Max, Lily, Jennifer, Megan.  And would then giggle and laugh and ask me to say it again. 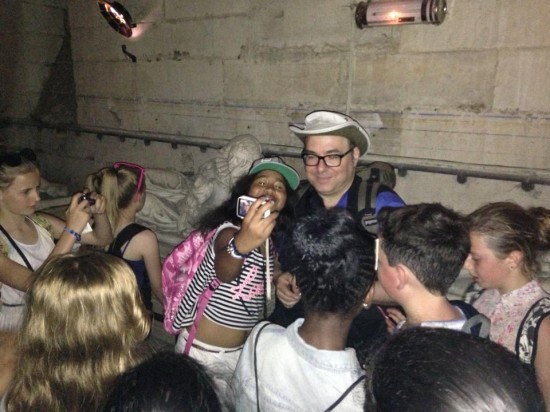 They also kept taking my picture! 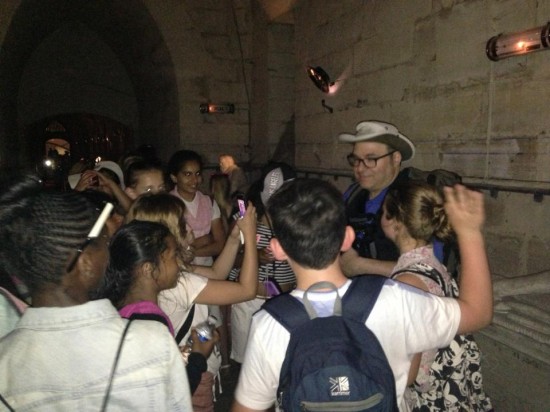 While this all looks very academic – none of it was about the castle!  They kept trying to get me to talk in an English accent for them. 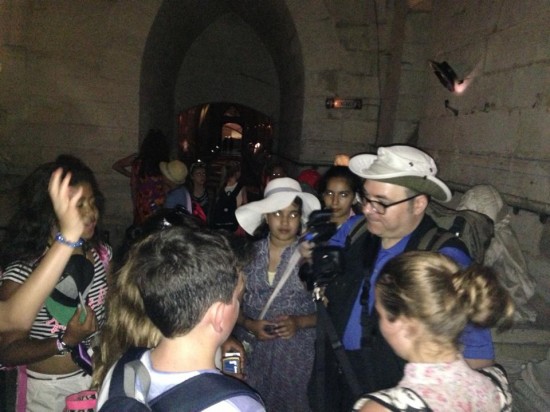 Their teachers thought this was very funny and said they imagined their big ‘take-away’ from one of the greatest castles in the world was that they met an American.

For me, I loved going back to some of my favorite spots and getting better versions of my classic pictures – like this Griffin. 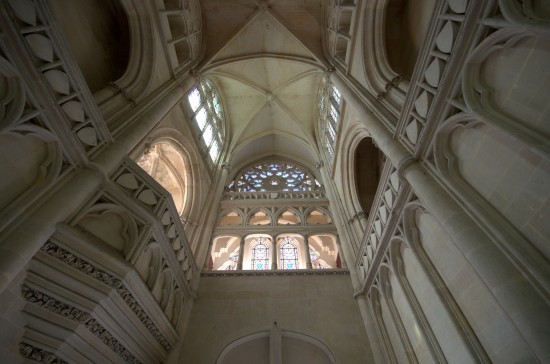 This drain spout is interesting and the last few times I saw it – it was green from moss or algae.  I was disappointed to see it clean! 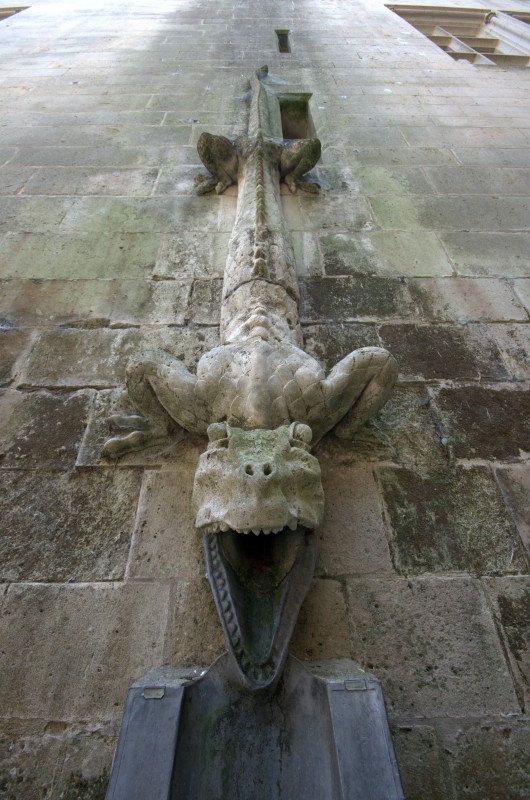 After we toured around – we headed out front to film my opening statements.

Now there I am on the lawn, Amanda is shooting and giving me direction and you can see some of the people who work there kind of watching me off to the side.  Our rule when filming is to just be enthusiastic teachers/tourists and only reveal that we are shooting a film at the end when we are leaving (in case we get thrown out).   I am doing take after take and can see them sitting and smiling – I got the impression that they were curious but not bothered.  So I hand them our cards.  The cards we carry have THIS castle on them and the logo is a stylized version of THIS castle.

Apparently this is a good thing.

One of the ladies who worked there asked if I knew about Michael Jackson and the castle? It turns out he loved the castle and had a replica built for Neverland Ranch.  She asked if we wanted to see a picture and proceeded to take us back into the castle and into her office (which is IN the castle).  I will be honest – I was freaking out – just getting to walk up a staircase that you never get to walk up!

We chatted for a bit – she was very nice to us – and then asked if we wanted to see a really special view.  She then opened a door in her office and it opened up unto the courtyard – wow.

I can’t thank her enough for making this trip to Pierrefonds extra special! 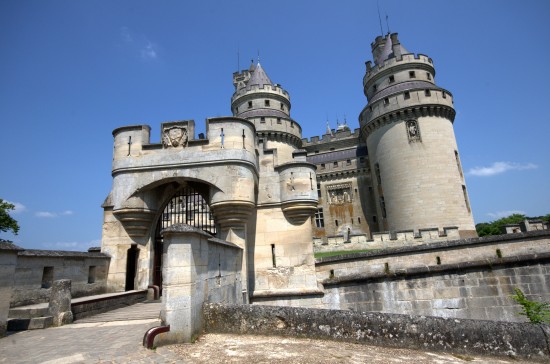 Castle hunting is a lot of work so afterwards we stopped for ice-cream. 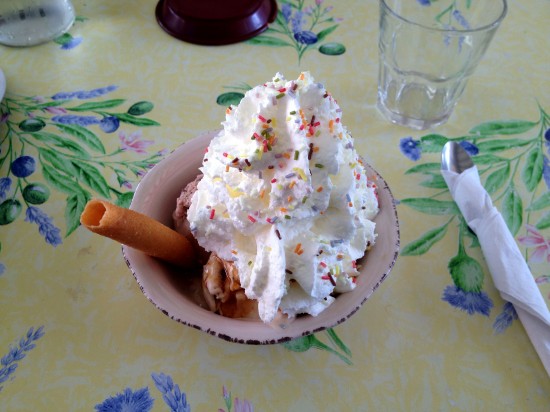 We then had to head back onto the road to get to Amiens by nightfall.  We didn’t realize it at the time but the GPS was set to avoid tolls (and therefore the highway) but we got to Amiens by dusk and headed into the hotel.  The hotel had a restaurant but he strongly suggested we eat elsewhere and headed down to the Quai which houses all of the fine dining. Along the way we passed Amiens Cathedral (which doesn’t count on today’s list because we don’t visit it till tomorrow). 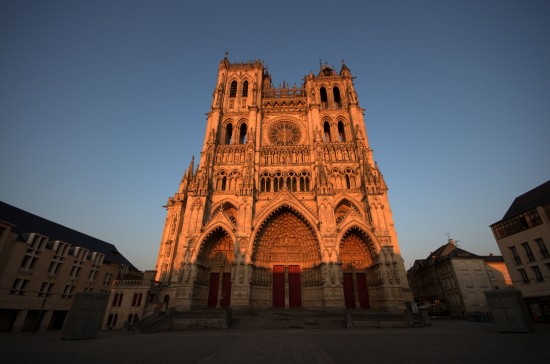 The lighting could not have been better! 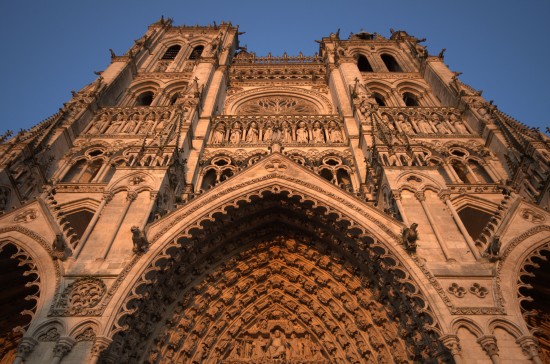 The sun was setting perfectly across the facade. 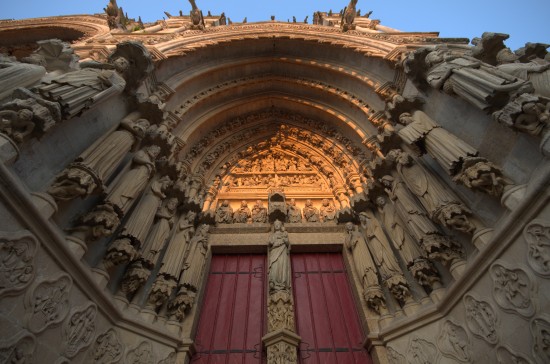 On the way to dinner we passed a Marionette shop! Creepy. 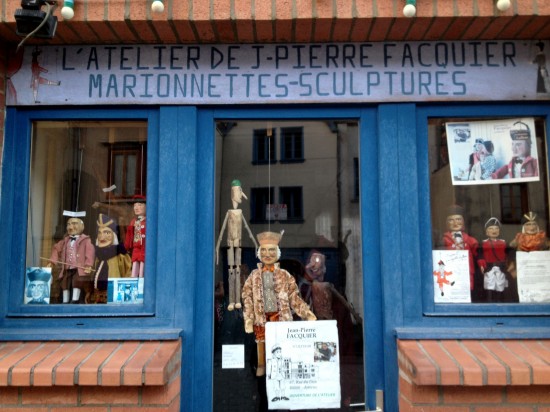 The restaurant was very modern.  My fois was served on a large slate slab! 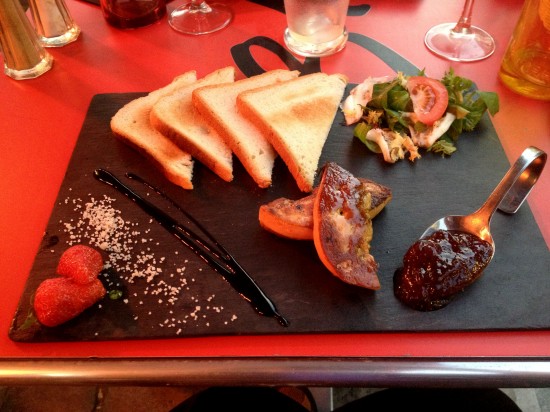 The bacon wrapped scallops were perfect – though the fries and watercress was a bit much. 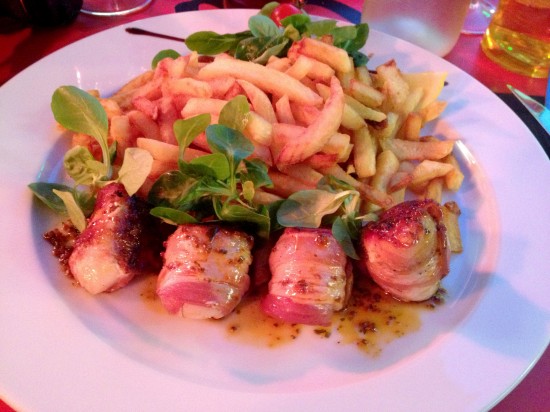 For dessert they had this platter with a drink and 5 mini desserts.  It also had 5 spoons.  I think I forgot to change my spoons though. 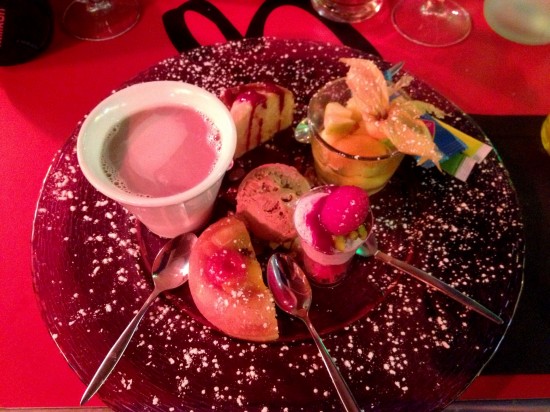 After dinner we passed by the cathedral and were awestruck by what we found! 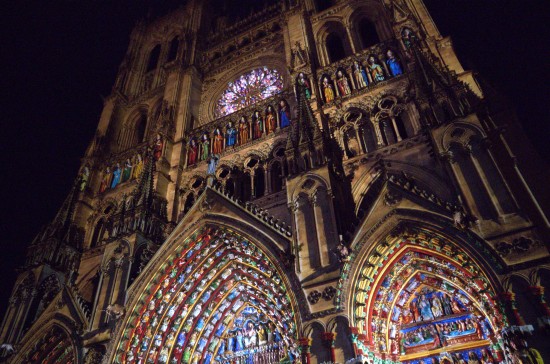 At night they have a multimedia show where they project the original polychrome colors onto the facade and show what the brightly colored statues would have looked like 600 years ago. 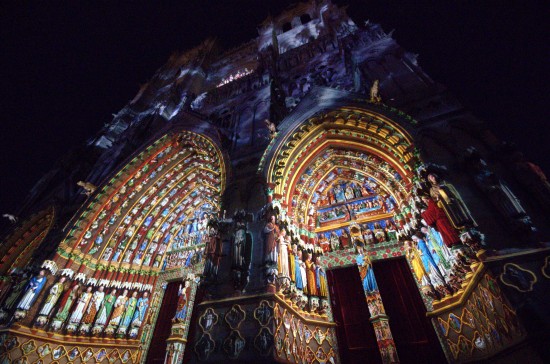 It was truly awe-inspiring.  Brilliant! 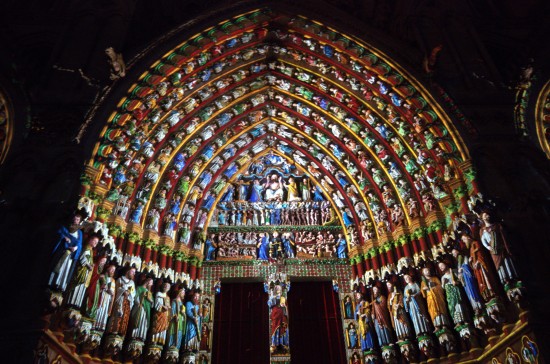 Even thinking of it now and re-looking at these pictures I get chills.  A truly transformative experience.  And to think we almost missed it by eating in the hotel.  If you go to Amiens you MUST see the cathedral at night!

So this ends day 3.  Tomorrow is another big day – we see the cathedral and 2 more castles.